Everything you need and more...


The History of the Regent

The Regent Theatre opened on 1st June 1928 as a 2,000 seat cinema, and the interior is still elaborately decorated in a revived baroque style, characteristic of the super cinemas of the time. The design is a variation of Robert Atkinson’s for the 1921 Regent cinema in Brighton, England, which was demolished in 1974.

There were comparable picture palaces in other cities in Britain and Australia, few of which now survive and, apart from the Dunedin building, none in their original form. All these designs are descended from Charles Garnier’s for the Paris Opera, (Palais Garnier) completed in 1875. The Regent’s auditorium successfully replays the exuberance of the original in a very different time and space.

The Dunedin building’s supervising architect was James Hodge White (1896 – 1970), one of the founders of the Dunedin architectural firm Miller White & Dunn. It was sited behind a building in the Octagon designed by David Ross (1828 – 1908) which was first opened in 1876. The Octagon building was given an additional storey in 1880 and remodelled at the ground floor in 1928 to provide the present theatre entrance.

In 1928, the theatre opened as a picture palace with its own permanent 18-piece orchestra and conductor-in-residence as the perfect live accompaniment for the silent movies of the period. Sound facilities were installed in 1929 and Cinema-Scope in 1955.

In 1972, Dunedin’s only live theatre venue, His Majesty’s which is now Sammy’s was condemned. Faced with the potential for the city to be left without a performing arts venue, a public meeting was held, the possibility of saving and converting the Regent Theatre canvassed and publicised, and the Otago Theatre Trust, now known as Regent Theatre Trust of Otago, was formed.

The Trust’s first task was to raise the funds necessary to purchase the premises from Kerridge Odeon. With the help of Dunedin’s passionate community, the Trust raised $160,000, saving the site from a potentially dismal fate as a car park or furniture warehouse.

One of the conditions of purchase was a caveat that no films would be shown at the venue for twenty-five years. Now, the Theatre boasts not only two 35mm Strong changeover projectors but also a state-of-the-art digital cinema package projector, enabling it to host almost any sort of film festival or event.

Since then, the Regent has been adapted to work as a live venue, although it still functions as a cinema during film festivals every year. The Trust continues to raise funds for refurbishing and upgrading the building and has so far invested over $9 million into the theatre since 1972. The Trust maintains the theatre’s operation but gifted ownership of the building to the Dunedin City Council in 1979.

Due to the changing expectations of both touring companies and audiences, coupled with increasingly rigorous industry regulations, the Regent Theatre was redeveloped in 2010/11 at a cost of $7.5 million.

A new floor on the stage house and dressing room block, a complete renovation of the technical staging equipment – counterweights and flying system, new grid and catwalks, a new stage, lift and much more – the renovation and painting of the auditorium, and the installation of new carpet and seats completed the job. The theatre now seats 1617 patrons, each of whom has considerably more leg room than previously, and up to seven patrons in wheelchairs.

The Regent Theatre has been restored to its beautiful best, with state-of-the-art staging, production and backstage facilities ensuring we can continue to offer a fantastically diverse array of performing arts, cinema, and community events.

As it is run by a charitable trust, the theatre relies on the support of the local community for its continued existence. A major part of this support is the Regent 24-Hour-Book Sale, the largest sale of second-hand books in New Zealand, and reputedly in the Southern Hemisphere. Every year since 1979, books donated by the public are sold at the theatre by volunteers over the course of 24 hours, raising considerable and essential funds.

Our Box Office team has the inside scoop on shows that are coming up, useful tips about all of Dunedin’s venues (and their seating quirks), and all sorts of other information you may not know you need.

As well as Regent shows, we sell tickets for all events at the Dunedin Town Hall, Glenroy Auditorium and the Forsyth Barr Stadium, and for many events at other venues around the city, and New Zealand.

HOW TO BOOK YOUR TICKETS

When you book your tickets, you can pay with cash or eftpos (at the Box Office) or credit card (Visa or MasterCard).

We are open Monday to Friday, 9am to 5.00pm. We also open at least an hour before a show for door sales. You can check whether a show is sold out before you come in by calling us or checking on our website.

If you have any questions about an event, seating or tickets you have purchased, email regent3@regenttheatre.co.nz, call 03 477 8597 or come in and see us.

All tickets incur a service fee and most will incur a credit card fee.

HOW NOT TO BOOK YOUR TICKETS

Any tickets purchased through a third party or unauthorised seller will result in your tickets being void, restricting your eventual access into the event.

Unfortunately we are unable to verify the validity of tickets that have been purchased through unauthorised third party resellers such as Viagogo as we cannot confirm whether or not they’ve been onsold more than once and the original purchase is generally made with little or no valid contact information.

The only advice we can give you is to get in touch with your credit card company and try to have the transaction cancelled and your money refunded if you have purchased through one of the reseller sites.

Sometimes it’s tricky finding the perfect gift for someone and so we offer gift cards to make it easier for you. Gift cards are available from the Box Office in almost any dollar value and can be redeemed for any show staged here within 12 months of purchase.

WE ARE LOCATED AT 17 THE OCTAGON

The complex consists of three buildings – the original Ross building (1876), the theatre auditorium (1928) and the fly tower, stage and dressing rooms (1980-81). The maintenance of the theatre has remained true to its historical roots, and it is the only large live theatre venue with a proscenium arch in the Otago area. In 1987, the Regent Theatre was registered as a Category 1 Historic Building. Behind the façade in the Octagon is the original auditorium with one of the largest audience capacities of any theatre in New Zealand, and, as it is fan shaped, all seats provide a good view.

The Regent’s stage was the largest in New Zealand until the Aotea Centre opened in Auckland. The stage and everything else behind the proscenium arch were added after the Trust took over the facilities. All the plasterwork was done locally and moulds kept for replacement work. The Dress Circle appears to be supported by only two pillars. The original design required no pillars but people felt unsafe without them as the Circle moves noticeably at times (if it didn’t, it actually would collapse) meaning the pillars are largely aesthetic. The theatre originally seated 1830 people. However, following a complete seating refurbishment to allow more leg room for patrons and space for wheelchairs, we now have 1617 seats.

We provide entertainment to approximately 100,000 patrons each year. Guided tours can be arranged for a fee.

There are several off-street parking buildings and car parks within a few minutes’ walk of the Theatre as well as both paid and free on-street parking.

There is a taxi rank across the Octagon which usually has taxis waiting for customers. If there are none, or you have mobility difficulties, we are very happy to call one to collect you at the door.

There are bus stops for most Dunedin bus routes at various locations around the wider Octagon area. 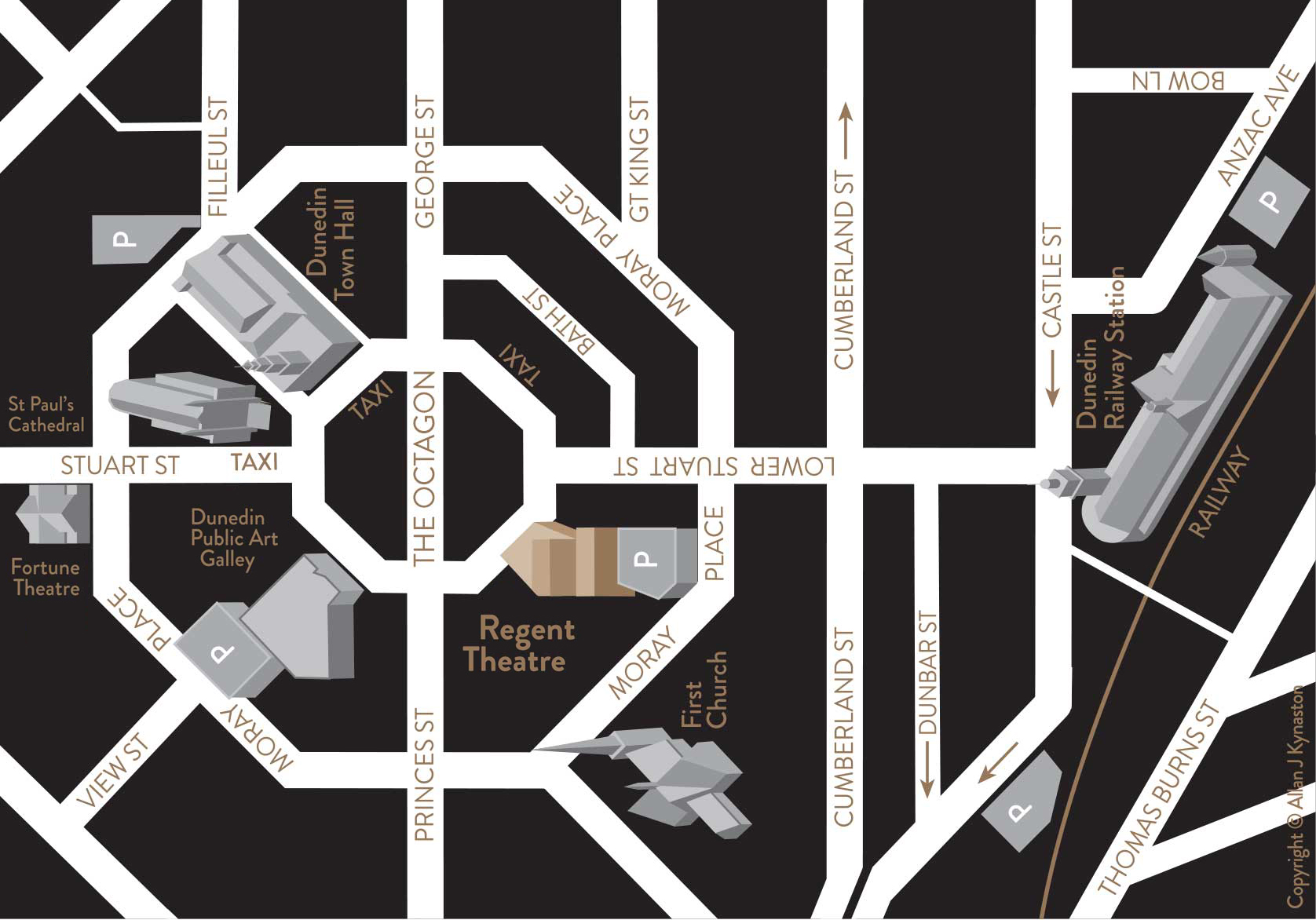 Wow your audience with the Regent Theatre’s glamour as a backdrop.

With an auditorium that seats 1617 people and state of the art infrastructure, the Regent Theatre is Dunedin’s premier entertainment venue. Our professional and experienced team will work with you to ensure you reach your audience and your event goes seamlessly.

A central location with great accommodation options a few minutes’ walk away.

We can discuss the use of the various areas in the auditorium, or for something a little unusual, perhaps even backstage…

Say ‘I do’ centre stage…

A wedding should be all about the happy couple and saying ‘I do’ centre stage puts them squarely in the limelight where they belong.

There are many options for the ceremony, for your photographs and for your reception – come and talk to us and we’ll help you make your day as exciting and glamorous as every wedding should be.

For that intimate gathering, cocktail function or a conference welcome…

The Regent Theatre’s central location makes it the perfect venue for your next special function, with easy access to other entertainment and transport options for your guests. We are happy to help you arrange the function.

The various spaces in the theatre lend themselves to stretching the limits of your imagination – the options are endless!

80 – 100 occupancy Theatre Style with a Maximum of 120
Maximum 100 occupancy cocktail style
Multiple configuration options available.
Maximum seating arrangement will be determined once staging has been confirmed.
NB: GA seating for all ticketed events

Please contact us for our rates which include Theatrical performances, Corporate Hire & Community Rates.

With an auditorium that seats 1617 people and state of the art infrastructure, the Regent Theatre is Dunedin’s premier entertainment venue. Our hire rates include use of the stage, auditorium, foyers, dressing rooms, the theatre technician for up to eight hours on a performance day, box office staff for door sales, Front of House Manager and Building Warden for up to four hours. Performance crew, ushers and doorpersons, power, heating, the tannoy paging system and the use of all theatrical and lighting equipment are additional and a sound system will need to be hired in. The Regent Theatre endorses and operates in accordance with the ‘Guide for Safe Working Practices in the New Zealand Theatre & Entertainment Industry’ (see Entertainment Technology NZ website below).

The Regent Theatre has a full complement of lighting and masking rig in place. We will work closely with you to get the best results possible from our set up. Your venue hire includes eight hours with our Technical Manager to get your event set up and running. If you are likely to need more time than this, please let him know early on so he can arrange technical staff to cover (this will be an extra cost). There is a guide below showing the sound box and auditorium and stage measurements but if you would like to come in and take your own, we can arrange a time to suit. The Regent Theatre endorses the “Safe Rigging Practices for the Entertainment Industry in New Zealand” and the “Guide for Safe Working Practices in the New Zealand Theatre & Entertainment Industry” and operates in accordance with them. These documents are available to download on the right-hand side.

Our Regent Theatre team is very experienced in all aspects of the logistics of ticketing for all kinds of events.

We manage all ticketing for the Regent Theatre and regularly work with promoters using other Dunedin venues including Kings & Queens Performing Arts Centre, the Mayfair Theatre, Otago Boys High Auditorium and a number of other venues. We have managed the necessarily complex ticketing for several of Dunedin’s major festivals, including the biannual Arts Festival Dunedin, the Dunedin Writers & Readers Festival, Dunedin Fringe and iD Fashion.

Our team can work through your ticketing strategy with you, to ensure your pricing, seating and other related matters will suit the Dunedin audience and fill the house. 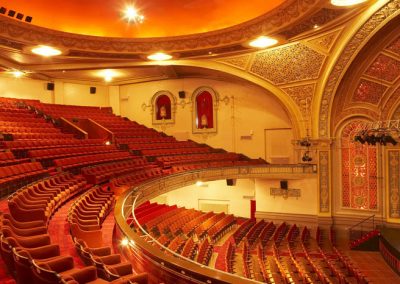 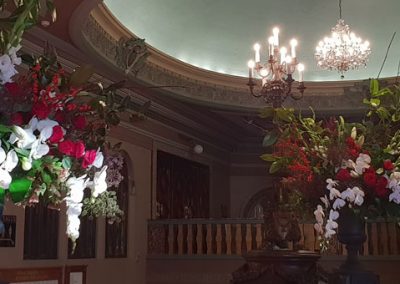 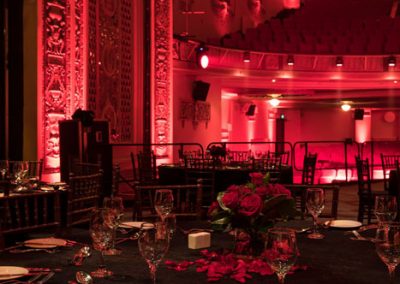 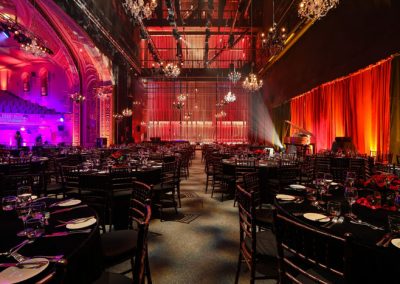 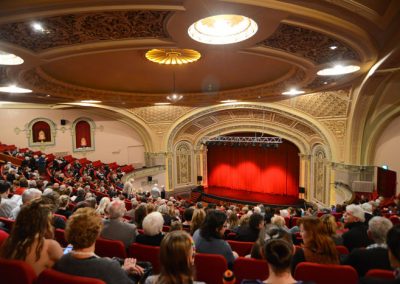 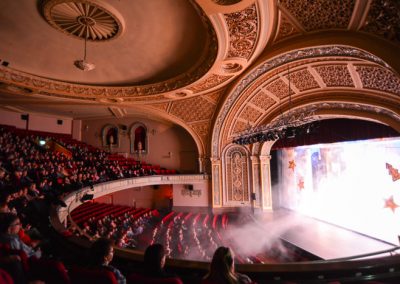 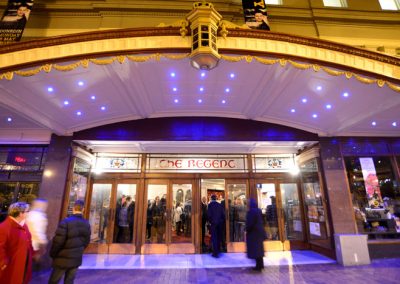 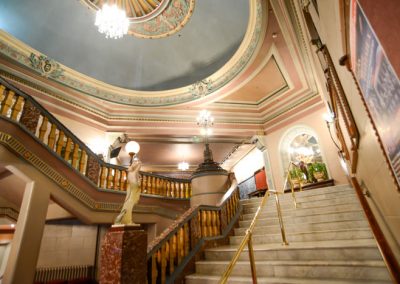 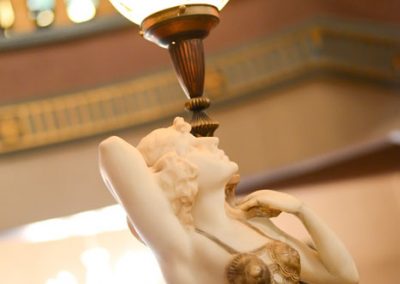 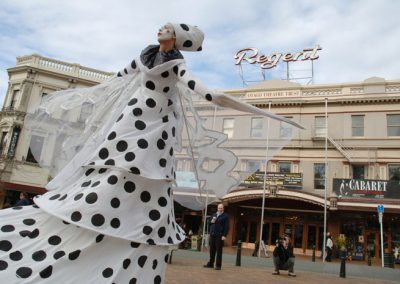 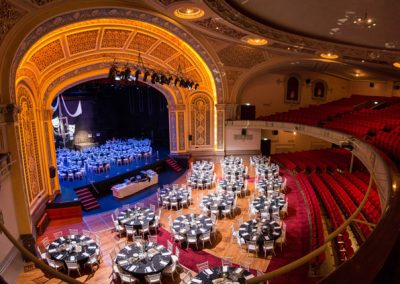 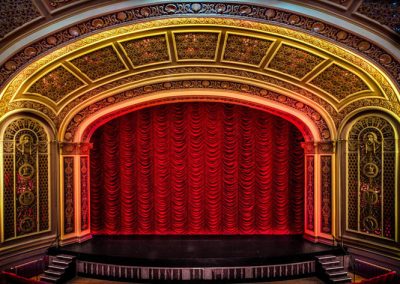 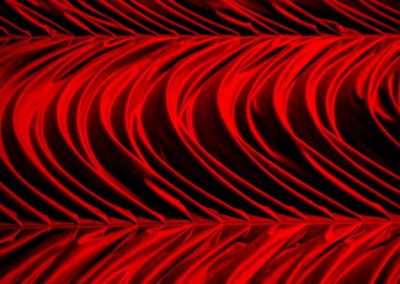